This morning, we woke up to find no ducks in the pond and Quakie sitting on her eggs inside the Duck Tube! She has finally decided to start incubating them. Assuming she has been laying 1 egg per day since we last counted, there must be 18 eggs in total. This is almost twice as many as she laid last June, and 10 more than what Tipsy laid in the same Duck Tube last year (8 eggs)! I don’t know if 18 eggs is normal for a wild duck, even if it is, I am certain it’s on the high end of the spectrum. 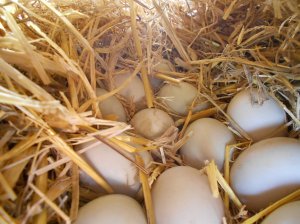 We had earlier discussed removing the older eggs in case they went bad in the nest, but there was the problem of distinguishing which of the 13 marked eggs were the oldest, and which were the newest. Removing all of those 13 was out of the question, since the most newly-laid eggs are definitely still viable. Quakie might also freak out if all those eggs suddenly vanished. She might not be able to count accurately but she certainly can tell the difference betwen 2 eggs and 15! We finally decided that we shouldn’t try to help nature (in this case, Quakie). I am pretty certain she will know what to do if she realises some of the eggs are duds. However I do wonder how she will be able to remove a bad egg from her nest – simply kick it out of the Duck Tube into the pond?

Lots of motion blur due to Quakie’s furious digging.

Some time in the late morning, I spotted Quakie in the pond taking a bath and went out to give her some duck chow. She was however very focused on foraging under the bushes and ground cover, and ignored me. I followed her to see what she was looking for – worms or insects. Or maybe snails?

I spent about 10 minutes watching Quakie digging around violently in the earth – it’s fascinating how she uses her duck bill like a drill. Made me afraid she will break it on something! Suddenly she began pulling something out of a small hole – I thought she had found a slug but this thing had two legs – at least, the part of it that was sticking out of her mouth. It was a small frog! I quickly turned on my camera but Quakie was already running to the pond with her catch, to better eat it in water.

I video’d her shaking her prey from side to side as she attempted to swallow it. I couldn’t see if it was still moving. Within seconds, most of it had disappeared down her throat, and with one final swallow it was gone. She looked pretty satisfied with herself and proceeded to have her usual bath, and then continued eating duck chow out of her food tray. I couldn’t imagine how she still had appetite to eat more after that meal of raw whole frog!

The search bar helps you find specific topics. Categories are broad topics; Tags are like index entries for specific subjects.

Your first visit to MagicalMallards? Start by reading the first blog post here.
More links to favourite duck-related blogs, forums or websites as well as news articles or scholarly resources will be added here soon.