Ducks grow so fast, that every week for a growing duckling seems like the equivalent of several years for human children. At three weeks of age, the ducks are no longer babies but more like young teens – physically awkward, but developing very distinct personalities, frequently asserting their independence but still needing to have mom and dad around for protection and reassurance. Speaking of growth, I have not weighed the ducks since they were around 2 weeks old. They are way too big now to get on the kitchen scales. They might even break it.

This morning, while still lying in bed, I heard the ducks around 7 am, peeping softly for a few minutes, and then there was silence. At about 8am, some of them started peeping again but calmed down after a while when we didn’t respond, and were quiet for another hour.  As it was Sunday, I went back to sleep slept till almost 9 am, when I was woken up by yet another bout of duck noises, this time much louder and more insistent, once they heard me getting out of bed. The decibel level was rising fast. I quickly dressed and went to let them out before they screeched the house down! 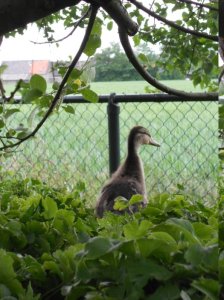 Dreaming of the day I will fly over this field!

The ducks are getting smarter all the time. Particularly at getting me to do what they want. Although they still spend most of their time in the pond, they now enjoy little trips away from it – up to 15 minutes at a time-  but insist that I stay near to them till they are “safe home” – in the pond. They don’t have to learn human language to tell me what they want. They are very good communicators – all they do is wait till they see me, then loudly peep at me until I start following them. Sometimes, they will even walk from the pond to the door of the living room or kitchen or wherever I am, peep at me, but make no attempt to come in. I will then know they want me to play “bodyguard” again.

One of their favourite places is a overgrown corner with weeds and grass behind the pond hill. We have been clearing the area of weeds to pave a new path, but we left that corner alone for now since the ducks love it so much there. I’ve accompanied them there and back to the pond several times per day, for the last several days. They know their way there very well:  up the side of the hill from the pond and then down a steep slope,  along the narrow path to the farthest corner between the fencing and the hill. 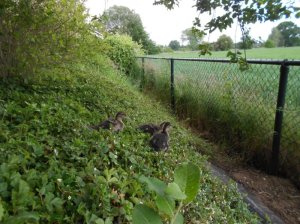 Getting back to the pond is a whole different issue however. The creepers covering most of the steep slope are too dense and prickly for delicate webbed feet, or where the landscape fabric is exposed, way too slippery for small ducks to climb. They tried with a lot of difficulty to scale this slope, slip-sliding or rolling head over tail backwards, until I showed them the “long way” back to the pond around the hill. It took only 2 or 3 guided tours before they were using that path without my help, not making any further attempts to climb the hill! Smart little duckies!

Yesterday, assuming they all knew how to get back to the pond themselves, I left them to forage behind the hill, and went to resume my house cleaning chores. They were all so engrossed they did not notice that I had gone off.  H. was working in the garden, and suddenly heard a series of loud, frenzied peeps emanating from behind the hill, first from their “favourite corner” then moving all the way back along the path behind the hill at top speed. The loudly peeping ducks calmed down only when they got back to the pond and saw H. nearby. It must have been a moment of vulnerability for them. Although they are already half-grown, they are really still babies at heart!

This morning, they came to the house and stood at the backyard door. I thought they wanted to be fed, so I opened the door to let them in as usual, and went to the pantry to get their duck feed. Meanwhile they walked through the house to front door peeping to be let out that way. They were starting to poop everywhere so I had to quickly get them out, and then led them back through the garden gate to the back yard and into the pond. They seemed quite satisfied with this little exploratory trip, but I am sure as they grow older they will want to see more and go further. We discussed taking them to a nearby lake at some point, but we would have to drive there, and I don’t know how we will be able to get them back in the car once they are out there, since they hate to be picked up or have our hands anywhere near them.

At home it is easy enough to herd them since it’s easy enough to convince them to go in the direction of the pond (their safe place). Away from home it might be a different kettle of fish. I’m sure they wouldn’t consider the car, or a cage, a safe place to come back to, for instance.

This morning I teased them by reaching out towards their little rumps (which look so cute because they are growing out little perky tail feathers), they screeched at me with wide open bills and ran from my hands as if they were being pursued by monsters. They are quickly growing out their juvenile feathers – which will enable them to fly – and losing their baby down. Their first new set of feathers will be brown and speckled like the adult female Mallard plumage. Even the drakes will not get their characteristic brightly-coloured “breeding” plumage till later in the year just before the fall migration.

The awkward teenager duck phase – bad hair, and limbs all out of proportion!

Because of the in-between stage of gaining new feathers and losing the old baby down, they  look rather shabby and unkempt, and because they are growing so fast, even a little out of proportion. You keep getting the impression that they need a good bath and brush-down as they permanently look so untidy! The different eye stripe patterns and other markings on their faces that I previously used to distinguish them from each other, are getting harder to make out. The down on their faces seem to become more sparse as their heads grow larger in proportion to the body, and the previously clearly delineated stripes are becoming fuzzier and less clear.

I am still taking lots of pictures and videos of them – mainly so I can look at them again when they are all adult ducks, which will be very soon, at the rate they are growing!

I am feeling rather wiped out today – cleaning up after 5 growing ducks is getting to be quite a challenge. They are actually very clean animals in the sense they bathe and preen themselves dozens of times a day, and generally don’t like sleeping in their own poo. In the outdoors, they can always move around to find a clean place to rest, but in a small enclosure they can’t do that unless their human frequently changes the bedding material, or deprives them of food or water during the time they are in the cage so they don’t poop so much. I find that too cruel for a growing duckling however, so I feed them as much as they like and as often as they like –  and have to clean up the corresponding output much and often!

Our neighbour thinks the ducks are big enough to live outside on their own, but we’ve decided to baby them a while longer, before we try to move them outside again. It is comforting to us to know for certain they are sleeping quietly and safely in our house at night and not fending off some unknown monster outside, out of our earshot. The stories I read about raccoons reaching through chicken wire, decapitating and disemboweling chickens and eating their entrails through fences, or pulling off wire mesh stapled to windows on poultry houses and destroying entire flocks are just too scary! I don’t think we have raccoons here, but one never knows.

There are plenty of other small predators about that may not be able to eat a large duckling, but certainly can injure them or scare them.

The search bar helps you find specific topics. Categories are broad topics; Tags are like index entries for specific subjects.

Your first visit to MagicalMallards? Start by reading the first blog post here.
More links to favourite duck-related blogs, forums or websites as well as news articles or scholarly resources will be added here soon.